ItsFunneh aka Kat (Katherine La), is a Gaming YouTuber with over 6 million subscribers. Funneh is the middle child in her family. She has four siblings called PaintingRainbows (more well known as Rainbow or Betty La), GoldenGlare aka Gold (Kim La), LunarEclispe (aka Lunar/ Wenny La) and DraconiteDragon (aka Draco/ Allen La). Together they form a group called The Krew.

She is known for playing Minecraft and ROBLOX on her channel. In addition, she plays Human Fall Flat, Overcooked 2, Fortnite, Sims 4 and more.

She used to do weekly Live Streams on Fridays which she calls “Funneh Fridays”, but has now been rebranded as “Krew Live” where she still plays with the Krew on a live stream but this time it’s *casually* once a week. The reasoning of this change is suspected to be the main problem of timing.

She also posted a Q&A on her channel, thanks to her fans for passing 2 million subscribers in 2018, as well as a face reveal. Her YouTube channel is a kid-friendly channel along with Krew AKA her siblings. She is 24 years old. 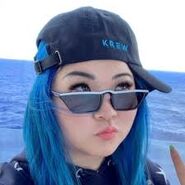 Add a photo to this gallery

A popular series on her channel is Yandere High School and she mainly specializes in roleplay, adventure, and mini-games and challenge-related content. She also plays the following games:

Retrieved from "https://funneh.fandom.com/wiki/ItsFunneh?oldid=2942"
Community content is available under CC-BY-SA unless otherwise noted.